We want to know what you think is cool! Tell us about the people, places, and things you love on twitter and facebook with #valleynerdwatch.

Hannah Shaffer is a local creator who’s been living and working in the Valley for several years. She’s one of the minds behind the lovely community space The Owl and Raven, as well as half of the team that created the innovative fantasy-quest game Questlandia.

She’s currently hard at work producing a game about migraines called 14 Days, which James is looking forward to seeing in print because he has and despises migraines. The more people who play a game that gives them some idea of how terrible they are, the higher the likelihood people won’t hassle him about doing stuff on a Bad Day.

James Olchowski: Hello, Hannah! Thanks for talking to the Nerd Watch today.

Hannah Shaffer: Thanks for having me!

JO: Did you grow up in the Valley?

HS: I didn’t! I’m originally from California and spent my teen years in southeastern Pennsylvania, just outside of Philadelphia. I came here for college and decided to put down roots after graduating.

JO: What drew you to the area?

HS: I really wanted to go to a school surrounded by a walkable, friendly town. The Valley seemed to offer a nice mix of weirdness, good food, and forests. I narrowed down my choices to Hampshire College and Smith College, both located in the Valley, and ultimately chose Hampshire because it was the weirder of the two.

JO: Is there anything unique about working in the Valley that you think would be hard to find elsewhere?

HS: Haha. Well…it can be hard to find a job here, for one thing. The flip side is that there are tons of independent creators and game designers here. I think there’s a level of support for the creative arts that might be hard to find elsewhere. Some of that has to do with all of the colleges nearby, but there are also businesses like TopatoCo that draw in creative people.

JO: Do you feel like the direction of your work has been influenced by your time in the Valley?

HS: Definitely! Going to Hampshire, with its interdisciplinary education model, inspired me consider options I might otherwise have passed over. It’s also been great to work in proximity to so many amazing game designers. Being close to other creators has made it that much easier to keep making games, even when the going gets tough.

JO: Have you played role-playing games all your life?

HS: Nope. I actually came to RPGs late in the game, a few years after graduating from college. I’ve always been big into computer games, but tabletop games seemed really mysterious. I knew there were groups of people who played tabletop RPGs together, but I didn’t know how to connect with them.

JO: What was it that got you into playing RPGs?

HS: It was a weird set of circumstances! When my partner Evan Rowland and I opened the Owl & Raven Community Space in 2011, a big group of local game designers showed up on opening day.

Someone in the group had apparently read about the event on a New York City vegan message board so…we still have no idea exactly how that happened. We talked about our mutual love of games, I confessed that I’d never actually played a roleplaying game, and the rest is happy history.

JO: What made you decide that you’d like to design a game?

HS: I had been struggling to design a computer game for a few years and it wasn’t really going anywhere. The game was about finding community in a post-collapse world, but playing it was such an isolating experience. As I started playing more RPGs, I realized that this was the medium I wanted to design in. Face-to-face, paper and pencil, at a table with friends. 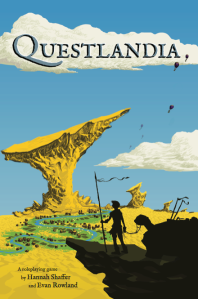 JO: Your first game, Questlandia, is compact but ambitious. It basically asks players to roleplay not only themselves, but the world in which they’re playing. Why did you decide to make the game’s scope so large?

HS: Haha. I think many people who set out to design their first game find that the project just keeps getting bigger and bigger. Originally, I wanted Questlandia to be a straightforward fantasy quest game. As I started playtesting, I found that players rarely had a chance to start their quests before the world spiraled out of control around them.

The more I thought about that, the more I liked it. So, it eventually became a game where you get to do a lot of expansive world-building in a kingdom that will inevitably fall to pieces.

JO: Before you started on Questlandia, what RPGs had you played?

HS: Some of the first RPGs I played and enjoyed were: Shock: Human Contact by Joshua A.C. Newman, Shooting the Moon by Emily Care Boss, and The Drifter’s Escape by Ben Lehman. Microscope and Fiasco came in the second wave!

JO: Can you describe what it was about playing these games that kept you interested, coming back to the table?

That’s a great question. RPGs often play with big emotions (like fear, attraction, suspense, hysterical laughter). Sitting down at a table and playing out these emotions can be really intense, and also really rewarding. I kept coming back for those tender moments, and for all of the awesome storytelling.

JO: Did you discover anything during the development of Questlandia that affected the path you took with it? A game with a key concept you liked, a story that resonated?

HS: I think the biggest thing is the “falling to pieces” I mentioned above. It didn’t start out as a game about collapsing kingdoms, but that’s what it turned into. The idea of these rapidly escalating kingdom troubles was something Evan and I really ran with as we developed the game.

JO: Questlandia is a DMless game, all of the players are on equal footing in terms of telling the story, what drove that decision?

HS: As someone who’s still relatively new to RPGs, I really like the idea of a game that a group of friends can grab on a whim and decide to run together, with everyone sharing responsibilities equally. I decided to take Questlandia in that direction in the hopes it would feel more accessible to new roleplayers, and would attract players who like highly cooperative RPGs.

DM or GM-less games can be tricky, because they ask a lot of the players. Fortunately, some require less preparation than others. Questlandia is definitely a higher prep example, but I like that it gives each player a chance to step into the GMing role.

JO: If you were to describe Questlandia using games with which more people are familiar, how would you describe it?

HS: Hmm. People are really good at drawing comparisons. It’s like a human superpower! I’ve seen other people compare it to games like Fiasco, Microscope, Quiet Year, and Archipelago, shows like Attack on Titan and Avatar Last Airbender, and Piers Anthony’s Xanth novels. So, that’s my totally unhelpful answer. 🙂

At the start of the game, you learn your kingdom’s ambition and troubles. For example, “Our kingdom loves Science and we’ve got a serious Wealth problem and a minor Health problem.” From there, players suggest kingdom features and norms based on what they already know. You immediately hear things like “What if our cool scientific technology is powered by solar gemstones?” Then another player will add, “Yeah! and a giant shadow has appeared in front of the sun, so the gems aren’t producing, thus contributing to our Wealth problem.”

There’s room for elves and dwarves in there, but they usually end up being cat-plant-hybrid-elves, or authoritarian robot dwarves.

JO: What was the biggest challenge you faced putting together Questlandia? Is there anything you wish you had done differently?

HS: Layout design! It was the first time either Evan or I had worked with InDesign, and we picked a really challenging layout for the book, where the rules on the right line up with an “actual play” transcript on the left. It was a neat experiment, but I’m not sure if I’d have the mental stamina to do it again.

JO: Your current game, 14 Days, is based around the experience of migraine sufferers. What led you to that subject matter?

JO: What do you hope other people will get out of playing 14 Days?

HS: I hope the game can help facilitate difficult conversations about pain. If a teenager whose parents don’t understand migraines can help communicate what they’re going through using this game, the work will have been worth it.

JO: 14 Days seems like a game with a smaller scope and physical size. Has this made it any easier to build and test?

HS: Yes and no. It’s definitely a smaller game than Questlandia, so the design process has been quicker from start-to-finish. It’s also a game that takes less than an hour to play, so it’s been easier to rally playtesters.

On the other hand, it’s more of a board game, where Questlandia is a book-based roleplaying game. That means Evan and I have had to do lots of new research around how to package and ship the game, where to source pieces from, and how to balance cost with quality.

JO: When can people expect to find this cool new game?

HS: We should be launching our Kickstarter before the end of June, sometime in the next two weeks! If folks want to follow updates, they can check out makebigthings.com or follow me on Twitter at @hanbandit.

Thanks, Valley Nerd Watch! Keep on being awesome!

JO: Thank you for taking the time to answer some questions!

Be on the lookout for that 14 Days Kickstarter, Watchers! We’ll obviously let you know when it begins, as well.

If you’re interested in checking out the Co-Working Space at Owl and Raven, we totally recommend it! For the sort of professional who likes to spend time in the company of other people while clicking away on a laptop but doesn’t like to be in the middle of a coffee shop all day, it is ideal.

If you haven’t already clicked the links and bought Questlandia, we really highly recommend that you do. It’s a beautiful book, compact, has an innovative (and time-intensive, apparently!) design that makes it easy to read, and it’s a wonderful introduction to role playing for new players or break from the traditional for old hands.

This site uses Akismet to reduce spam. Learn how your comment data is processed.